This big question comes from a New York Times article by Beverly Gage, which was shared via Twitter by Mary Ellen Daneels ( @daneels_m ), lead teacher mentor for the Robert R. McCormick Foundation and contributor to IllinoisCivics.org

The article does a fantastic job giving historical perspective on the various movements which have taken root, which include contemporary ones like MeToo, Parkland and Black Lives Matter as well as those dating back to the 60s and before that the temperance and anti-Catholic movements of the early 19th century. There are so many intriguing lines of inquiry and observations but one that I found most compelling was this observation about how movements of today lack staying power. Gage writes…

But even showing up in the street, in great numbers, does not necessarily earn much credit in the current environment. Making “your movement” has become easier; making it stick, gaining public respect and effecting concrete change, has arguably become harder than ever.

This observation leads to a question…

If turning out thousands, or even millions, of outraged citizens merely indicates potential, how and when do we decide that a movement actually exists? 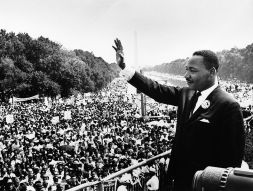 This is fascinating.  I think Gage is onto something. Just showing up, which may have been necessary and sufficient to define a ‘movement’ and effect change in earlier times, just doesn’t cut it in the current environment. In fact, a protest, parade and demonstration today are often seen as just more blips in an endless series of news cycles.

Just when does a moment turn into a movement?  Hmm…

I needed a different angle on this…

And I got one, courtesy of Bill Chapman ( @classroomtools ) who responded to the original tweet by sharing a Ted Radio Hour. In that piece there is an incredible segment from behavioral researcher Simon Sinek titled How do great leaders inspire us to action?  11:58.

So, what makes leaders great is their capacity to follow and to encourage so many other people to see and believe the same thing, for themselves. If a leader can do that over time, a movement is born.

Maybe that is part of the answer to the big question. For a moment to turn into a movement there must be great leaders who offer sustained self-sacrifice to a higher cause over time and who encourage us to make the choice to follow their beliefs.   In the current media-frenzied environment, it is much harder for these leaders to flourish because they are in competition with so many other news events and because the movements themselves are still so young.  I wonder– who will be the leaders who rise up and galvanize the public’s energy towards positive social ends?

When does a moment turn into a movement?

The applications of this big question for teaching are vast. Imagine asking it in a US history, government, or sociology class as an opening to explore the power of leadership to shape society. Have students pick a modern day movement, a leader of that movement and evaluate the progress of the movement based on insights from Gage’s article and Ted Radio Hour segment.

That is just one idea. I could even imagine adding it to a list of big questions which guide an entire US course.

Read the article. Listen to the Ted Radio show.  What opportunities do you see to design learning activities?  Write your ideas in the comments!