From the historic March on Washington to the streets of Charlottesville, and now into the opening ceremonies of football games, we see people and groups fighting against intolerance to promote a more peaceful, just society.

Can intolerance be a virtue?

I didn’t think so, but then I read Chapter 58 Intolerance is a Virtue from Dr. Andrew Pessin’s 60-Second Philosopher and began to question my thinking. I decided to put this Big Question to the test in a lesson combining MLK, morality and the importance of civic engagement. 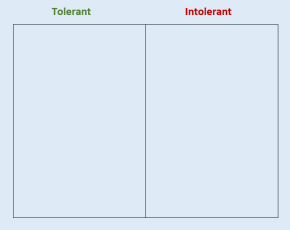 Day One: Read the chapter with students and ask them to think about their criteria for determining  when to be tolerant or intolerant of people with whom they disagree.  Generate the lists and discuss.

Judge the extent to which this discussion is appropriate for the age and maturity of your audience as it may elicit sensitive issues. Prepare for an emotional, and at times uncomfortable, discussion that might last longer than you plan.

Students come to realize that on many hot-button issues they are much more intolerant than they originally thought.

Day two: Now read MLK’s I Have a Dream speech. Either individually or in groups, tell students to identify sections of the speech where MLK expresses intolerance of other people’s views and his reasons for doing so. Discuss findings, making sure to revisit the Big Question along the way.

From here you could go in different directions–try out another MLK speech, add a little Malcolm X, or W.E.B. Dubois in a history class. Or in a government class introduce modern-day interest groups which fight vehemently for their causes.

Many students fear taking a stand. What I hope students get from this lesson is the permission to assert their strongly held ethical beliefs. It’s okay to believe in something passionately; it’s okay to think others are wrong sometimes. And, ultimately, it’s necessary to take informed action and do what MLK did–  FIGHT for what you believe in.

This lesson can be adapted to align with recommendations put forth in the C3 Framework for social studies. Using that framework as a guide, students could find their own sources and use the evidence they find to address the Big Question.

If you want to read a competing perspective to the chapter Intolerance is a virtue, consider It’s all Relative.